Christmas bells are featured prominently in religious and secular traditions throughout history as symbols used to announce arrivals, events, and other special celebrations. There are several kinds of Christmas bells used during this special holiday and each has a special meaning and history.

Types and Meanings of Christmas Bells

Church bells, sleigh bells and handbells are popular Christmas icons. Each type of bells brings back memories of past Christmases usually accompanied by Christmas music.

Most churches observing a midnight Christmas service ring the bells at midnight. Believed to be the time of Christ's birth, Christmas Eve services often start at midnight signaled by the ringing of the church bells.

Another popular Christmas bell is the sleigh bell. This type of bell was designed to be worn by horses as a warning to any pedestrians. This holiday bell was made popular by the Christmas song Jingle Bells. According to Your Dictionary, the melodic sound of sleigh bells is created by the clapper inside the metal sphere balls. The bell features a small open slit to create a higher pitch when the clapper strikes the inner walls of the sphere. 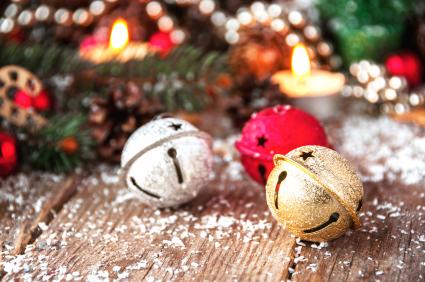 The sound of handheld bells has been used for centuries as part of ceremonies and announcements, such as a town crier delivering the daily news. Handbell ensembles ring out Christmas carols and songs in a spectacular musical celebration of the season. 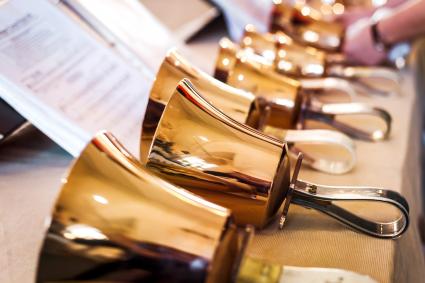 Other Uses of Christmas Bells

Christmas bells are an intricate part of Christmas and find their way into homes through Christmas tree ornaments and other decorations. Some of these include.

The Story Behind I Heard the Bells on Christmas Day

The story behind Henry Wadsworth Longfellow's poem, which was later transformed into the Christmas carol I Heard the Bells on Christmas Day, is bittersweet and became a healing poem for the brokenhearted poet. Having lost his beloved wife in 1861 to a freak accident, Wadsworth's suffering deepened when his son was wounded in battle during the Civil War. When you understand the extent of his long suffering, the meaning of the poem is more potent. 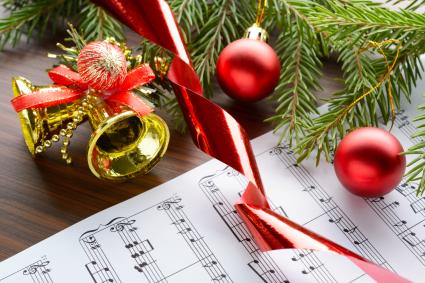 Loss of His Beloved Wife

Henry attempted to smother the fire that engulfed his wife, Fanny, when her dress accidentally caught on fire. Unfortunately, Fanny, died from the trauma and burns. Henry sustained severe burns but recovered. However, grief sent him into a deep depression.

In 1863, Henry's pain ripped deeper when his oldest son was wounded in battle during the Civil War. He rushed to Washington, D.C. to be with his son and slipped even deeper into his depression. On Christmas day, as Henry sat by his son's bedside, he listened to the church bells ringing and the voices raised in song. Out of his pain emerged what became one of the most beloved Christmas songs, I Heard the Bells on Christmas Day.

The meaning of Henry Wadsworth Longfellow's poem I Heard the Bells on Christmas Day is found in the words (lyrics). The Christmas inspired poem progresses, clearly revealing his agony and pain, but by the last stanza, there is a resounding pealing of hope in his words.

About the Christmas Song

The Christmas song, I Heard the Bells on Christmas Day, originally followed most of Longfellow's poem, but over time, there have been various versions, most leaving out the poem stanzas that reference the Civil War.

Carol of the Bells

The original music was composed in 1914, by Mykola Leontovych of Ukraine. It was taken from a Ukrainian folk chant, Shchedryk that means Bountiful Evening. The song was also known as The Little Swallow since it told about a swallow heralding news of great wealth.

Leontovych was commissioned to write the song for a Christmas concert. He took four notes from the original folksong. In 1921, the song was performed for the first time in the United States at Carnegie Hall. In 1936, Peter Wilhousky, an American choir director/arranger, wrote new lyrics, copyrighted them, and published the song retitled as Carol of the Bells. The new lyrics brought the mystique of the season to the forefront with the bells ringing the excitement of people celebrating Christmas.

According to Song Facts, the original title of Silver Bells was Tinkle Bell. Written by Jay Livingston and Ray Evans to be sung in Bob Hope's 1951 movie, The Lemon Drop Kid, the title was changed. Livingston made the suggestion to change the title after his wife pointed out the bathroom connotation of the song title. The song writers changed the title to Silver Bells and was sung by Bob Hope and Marilyn Maxwell in the movie. The bell symbol was inspired by a small bell Livingston kept on his desk. The sound of ringing bells herald the season of Christmas

The fun, light-hearted, Christmas song, Jingle Bells is an all-time favorite among Christmas celebrations! The Medford Historical Society has a plaque in front of Rossetti Optique on High Street in Medford, Massachusetts state the song was written by James Pierpont Lord. Lord published the song in 1857 under the title One Horse Open Sleigh. The song was written to celebrate the horse-drawn sleigh races popular during the Thanksgiving season, but became a favorite Christmas song, retitled as Jingle Bells. The song is lively and conveys the excitement of the holiday season with a fun carefree sleigh ride and the jingling of the horses' bells.

Different Cultures and the Use of Bells Throughout History

Bells have been used from ancient times to alert local populations. These alerts can be announcements of good or bad news, celebrations, signifiers of special events, such as a wedding or as dire warnings that a natural disaster, such as a landslide or flood, is imminent. Bells have tolled victories, coronations, New Year's Day, invading armies, and various unexpected events. Bells have also been used as an "all clear" signal to alert communities a danger has passed.

From ancient times, the sound of a ringing bell, along with drums and horns, was used in rituals to frighten away evil spirits, demons, devils, and other malevolent beings of the spirit world. Bells, horns and drums have been used to drive animals in a hunt toward an awaiting ambush.

These same bells were also used in celebration of joyous events, such as weddings, births, and various seasonal ceremonies. Religious sects incorporated bell ringing in their various ceremonies. The ancient Chinese musical instrument, bianzhong consisted of rows of bronze bells played by the striking of a mallet. Large bells were cast and suspended in church towers and steeples and rung as a call to worship. These bells are also rung at midnight on Christmas Eve to announce the historical birth of Christ.

Celebrating Christmas has the added beauty of bells. These symbols of heralders have become an intricate part of the Christmas season with songs, decorations, home decor, and even jewelry and fashion. Ringing a bell at Christmas is another way to celebrate the birth of Jesus.