Christmas Decorations Around the World

Most people who celebrate Christmas stick with traditional decorations including natural elements like Christmas trees and wreaths made of greens. Decorative ornaments, ribbon bows, and candle or electric lights are also typical. Some regions, however, have completely unique decoration customs that haven't caught on with the mainstream.

Glassblowers and artisans from the island of Murano, Italy have stirred up their own unique holiday competition that involves true rivalries. Each artisan puts all their efforts into creating the most vibrant, colorful, and unique glass-blown ornaments to celebrate the joy of the Christmas season. These highly coveted Italian Christmas decorations aren't easy to come by because each one is handcrafted and you can join the competition by purchasing your favorites. 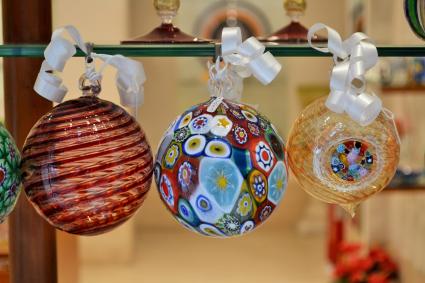 A himmeli is a hanging holiday decoration made from straw that is customary in Finland and found throughout other Nordic countries. Individual pieces of straw are folded and angled to create stunning geometric shapes and patterns. In the old days, the himmeli hung over the dining table starting at Christmas as a symbol of luck for a great harvest the next year. Today, the himmeli is more a symbol of honoring heritage during the holidays.

Of all the popular German Christmas decorations, the unveiling of the Christmas tree on Christmas Eve is the most exciting. Some Germans gather on Christmas Eve to decorate the tree together. Others wait until after dark, then someone pulls out the hidden, pre-decorated tree and puts it on display. When they ring a bell, everyone can come into the room to see the Christmas tree. Traditionalists still use real wax candles to light their trees with the help of special candle holders and a lot of safety precautions.

Greek Colander on the Doorstep

As a way to ward of the legendary goblins, or Kallikantzari, who come out on Christmas to play tricks, some Greeks will leave a kitchen colander outside their door. The idea is that the goblins will be distracted trying to count all the holes in the colander and they'll run out of time to participate in mischief.

German Christmas pyramids, or Weihnachtspyramide, are unique holiday decorations that look like decorative wooden toys. Each pyramid is crafted to have several tiers that hold candles and depict Christmas scenes. The heat from the candles turns a windmill-like fan at the top of the pyramid. Originally used in Saxony as a substitute for Christmas trees, they're meant to represent the joy and light of the Christmas season. Hanover is home to a 60-foot tall Christmas pyramid tower that visitors can walk through. 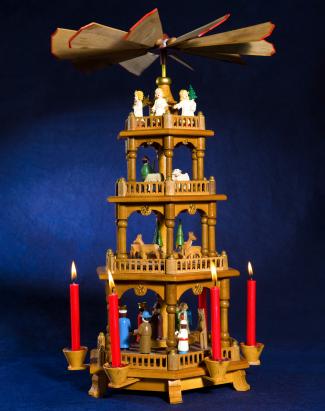 Yummy Christmas Foods Around the World

Each family likely has their own unique food traditions for Christmas in addition to the customary dishes for their area. Some Christmas food customs around the world include hiding things in cakes or breads while others involve elaborately decorated desserts.

Italian Feast of the Seven Fishes

Some families in Southern Italy and Sicily, and now other parts of the world where they have immigrated to, participate in the Feast of the Seven Fishes on Christmas Eve. The exact origins of the tradition are unknown, but it's thought to come from the Catholic practice of avoiding meat on holy days and the significance of the number seven in the Bible. The specific types of fish and how they're prepared aren't as important as the number of fish served at the meal.

The Polish Christmas feast called Wiglia doesn't start until guests see the first star in the night sky on Christmas Eve. The meal featuring 12 courses can't start until everyone has broken traditional Christmas wafers together while wishing each other good things. These wafers resemble those found in churches and feature stamped images of religious figures.

To get in the Christmas spirit Venezuelan families gather to start making hallaca, a kind of tamale, in the morning. The whole family works together to create these seasonal specialties. As family members work together, they listen to Christmas music and drink eggnog. 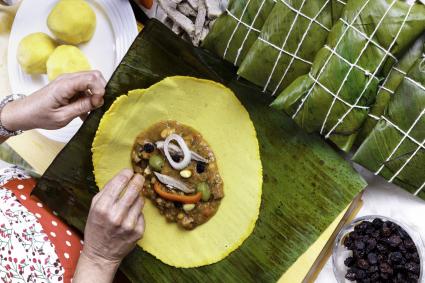 Lithuanian Christmas Eve dinners also start with the breaking of Christmas wafers, but they also partake in a dessert first approach to the meal. Dinner guests enjoy kūčiukai, a biscuit or cookie, with some poppy milk before indulging in the seasonal feast. In some parts of Lithuania kūčiukai are called "šližika", "kleckai," or "kalėdaičiai." These bite-sized treats are typically used as the main centerpiece at the Christmas table.

Exciting Christmas Characters Around the World

Many cultures that celebrate Christmas have some main character attached to them that resembles the American Santa Claus. Some cultures have unique Christmas characters that may or may not be as jolly.

Although she doesn't arrive until January sixth, many Italian kids get as excited for La Befana as the do for Father Christmas. Like Father Christmas, La Befana leaves present for the children of Italy. She is said to be a witch who is looking for Jesus to give him gifts after his birth. Since she can't find baby Jesus, she leaves gifts for all the children. This is one Christmas tradition in Italy involves kids leaving out stockings for La Befana to fill, and if they are naughty, they'll get coal or vegetables instead of presents. 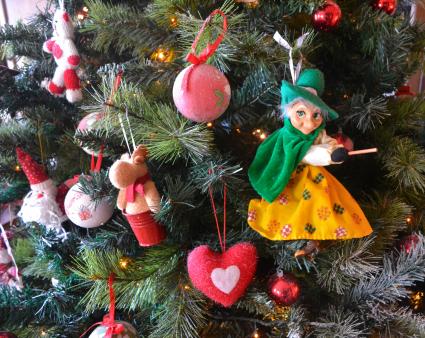 Saxaphone Santa and His Sisters in China

While there are many Chinese Christmas traditions, the odd character known as Saxaphone Santa and his sisters are unique to the area. This Santa combines holiday music from his favorite instrument, the saxophone, with holiday cheer as he visits shopping centers. Instead of elves traveling with him, Saxaphone Santa is often surrounded by female helpers known as his sisters. 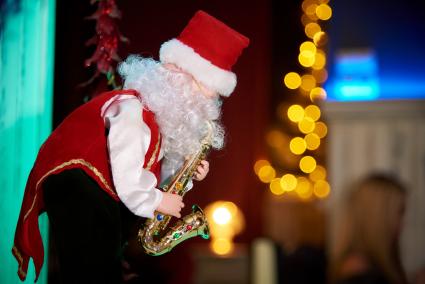 Although his original legend is a horrifying one, the story of Olentzero has changed over the years into a joyous Christmas character for the Basques. This older male character dressed in peasant's clothing is said to have a big heart and a gift for crafting toys and things with his hands. When he fills his bag with handmade goods, he travels to nearby villages to deliver toys to all the kids.

The Snow Maiden in Russia

As one of the few female characters associated with Christmas, Russia's Snegurochka, or The Snow Maiden, is a unique holiday helper. She helps Ded Moraz, or Old Man Frost, deliver presents to good kids as a way to celebrate each new year. 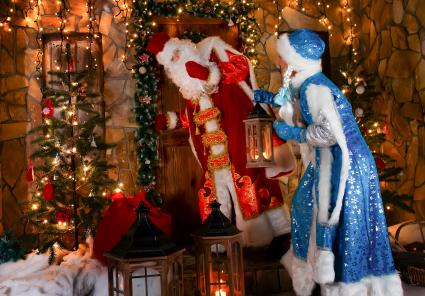 Canadian Christmas traditions vary by region. In Newfoundland masked mummers roam the streets during the twelve days of Christmas. Mummers are people dressed in wacky attire like wearing shoes on the wrong feet and featuring large fake bellies and humps on their backs. They either wear a mask or some lace to cover their face. Mummers show up at your door or public locations, and if you guess their identity you give them something good to eat or drink.

Fun Christmas Activities Around the World

After people in different countries have decorated, planned holiday meals, and told stories about Christmas characters, they look for meaningful activities to enjoy during the holiday season.

One unique Mexican Christmas tradition is called Las Posadas, meaning "the inns." From December 16 to Christmas Eve families and groups gather for a sort of human parade where they dress as or carry statues of Mary and Joseph. The group mimics Mary and Joseph's search for shelter by knocking on doors and asking to be let in. This planned route often ends with one location letting the group in for a party.

Once the Christmas season has wound down, on January sixth women in Ireland celebrate Women's Little Christmas, or Nollaig na mBan. Traditional gender roles are reversed and while the men stay home to cook and clean, the women head out on the town for a day of fun.

Holland Christmas traditions include the giving of surprises instead of presents. On St. Nicholas Eve, people exchange gifts that are packaged using creative means instead of traditional wrapping. Some gifts use a Russian nesting doll design while others include a full scavenger hunt to get to the present. This makes the act of giving gifts more elaborate and fun.

Pass the Baby Jesus in Venezuela

One Venezuelan Christmas tradition from the Andean region involves passing around the Baby Jesus from a nativity. After everyone sings in front of paradura del nino, or the Christ child, they take turns kissing him before putting him back in the manger.

Midwinter Hoornblazen in the Netherlands

If you want to celebrate Christmas in the Netherlands, be prepared to hear some horns instead of bells. Midwinter Hoornblazen, or midwinter horn-blowing, is a tradition in rural, Eastern parts of the Netherlands. During Advent, these special large horns are blown over wells to announce the birth of Christ. They can be heard for miles as a way to mark the season.

Peruvians extend the joy of Christmas throughout the entire season with traditional activities like Chocolatadas. This Christmas tradition in Peru involves more fortunate people giving to others. The main way people give to others is by providing cups of hot chocolate to kids and anyone who has traveled far for the treat. In some cases, treats also include cake and small gifts for kids.

Have Yourself a Multicultural Christmas

Whether you're interested in history and multicultural studies or need some new Christmas tradition ideas for your family, seeing what others are doing around the globe can be helpful and fun. Many Christmas customs are rooted in the same beliefs or stories and it's cool to see how different people interpret the same notions.

Comments
© 2006-2021 LoveToKnow, Corp., except where otherwise noted. All Rights Reserved.
Christmas Around the World: From Customs to Decorations