Christmas traditions in the Netherlands are a unique and meaningful celebration of both the secular and spiritual aspects of the Christmas holiday. Weeks of festivities culminate during two distinct holidays within the season, and both are celebrations everyone can enjoy.

The Netherlands, also known as Holland, is a western European nation that borders Germany and Belgium. It is a densely populated nation with a rich history, often symbolized by its popular windmills, tulips, and wooden shoes.

Unique Christmas Traditions in the Netherlands 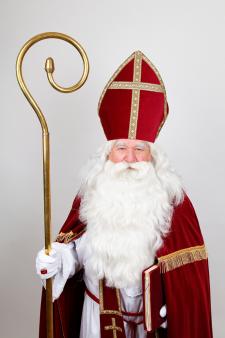 Sinterklaas Avond - St. Nicholas Eve - is celebrated annually on December 5 and is considered the eve of St. Nicholas' birthday. On this eve, Sinterklaas journeys to the homes of every child in the Netherlands and leaves small gifts and treats for them to enjoy. Sinterklaas is similar to (but not the same) as Santa Claus. Sinterklaas looks quite different from the jolly man depicted in western culture, and the Dutch consider him to be a different person than Santa Claus, whom they call Kerstman (as noted in the links above). Sinterklaas is tall and slender, and he wears dark red robes and a hat similar to a bishop's attire. In many traditional images, he is elderly and has a long white beard.

Sinterklaas Avond celebrations actually begin several weeks before December 5 on the first Saturday after November 11. Sinterklaas is believed to live in Madrid, Spain, and he arrives with great fanfare on a steamship at the start of the holiday season. Amsterdam and other port cities generally hold great celebrations to herald his arrival, including parades, ringing church bells, and children's parties.

Sinterklaas is accompanied by his assistant Black Peter (Zwarte Piet), who is dressed in 16th century Spanish attire to symbolize Spain's dominance over the Netherlands during that era. But Black Peter's face is covered with soot and he rides a mule, a stark contrast to the more joyous colors of Sinterklaas's red robes and white horse. It is Black Peter who goes down each home's chimney to leave gifts for the children, though in some legends he is also said to punish disobedient children.

Children in the Netherlands leave their shoes filled with hay, carrots, and sugar for Sinterklaas's horse. In the morning, the horse treats have been replaced with gifts for the children.

Rural eastern areas of the country celebrate different Christmas traditions in the Netherlands. In addition to Sinterklaas Avond celebrations, this area is well known for the midwinter hoornblazen, or midwinter horn blowing. Handmade horns, three- or four-foot horns carved from birch or elder saplings, are blown over wells to announce Advent and herald the birth of Christ. The low tone produced from these horns resonating over the wells can be heard for several miles, and it is not unusual for several farms to seem to call to one another with their horns.

In some areas, these horns may be blown each day of Advent, or they may be reserved for the first or last days of the spiritual celebration.

December 25, known as Eerste Kerstdag, is still a holiday in the Netherlands. But since most gift-giving is done on Sinterklaas Avond, this day is a time for quiet church services and traditional family meals. Christmas Day is a time for family gatherings and delicious meals, including special breakfasts and formal dinners that include the food gourmetten. Santa Claus (Kerstman) is believed to come from Finland on Christmas Eve and deliver small gifts (but most of the major gift-giving has already been done on St. Nicholas Eve).

Second Christmas Day (December 26), known as Tweede Kerstdag, is a day when people will go visit relatives or go to stores to do fun shopping. Many of the biggest stores open on this day. Families might also use the two days to have separate meals on different sides of the family.

As described in the links above, Christmas decorations in the Netherlands include rustic Christmas décor such as pine and holly boughs, simple lights, and candles. Many homes do have Christmas trees, and they may be decorated with all types of lights and ornaments or they may be simpler than western holiday decorations. Themed trees are especially popular. Another popular decoration is poinsettias (kerststers), which are often used as centerpieces, accents, and other holiday décor. In many cities, bridges and other public places are decorated beautifully with lights.

Delicious food is a key element of many holiday celebrations, including Christmas in the Netherlands. Candy wreaths often decorate trees, and small treats may be given with gifts. Lavish dinners on Sinterklaas Avond typically include venison or roast goose, roast pork, vegetables, and homemade breads. Boiled chestnuts, fruit, an almond paste bread (kerststol) similar to marzipan, and cookies are also popular. Many families bake letter cakes shaped like the first letter of each family member's name to add a personal and tasty dish to the holiday fare. Currant buns and rich breads with fruit and nuts (stollen) are also popular.

As noted in the links above, it is customary to give surprise presents on St. Nicholas Day (Dec. 6). Although presents are put in the shoes the night before, this is a different gift tradition. Gifts on St. Nicholas Day may include whimsical poems, and it is not unusual for strange packages or riddles to be included to make each gift unique and exciting with clues about who the mysterious gift giver might be. Gifts may also be hidden or disguised for more merriment.

It is easy to celebrate holiday traditions from the Netherlands, and many families, both with Dutch ancestry in other countries and those who live in the Netherlands, have created personal blends of traditional celebrations and modern holidays. However you choose to celebrate this universal holiday in a uniquely cultural way, you will be sure to have a very Vrolijk Kersfeest!

Comments
© 2006-2021 LoveToKnow, Corp., except where otherwise noted. All Rights Reserved.
Christmas Traditions in the Netherlands