A wreath adds beauty and color to the season, but the Christmas wreath meaning contributes more than just splendor. There is an inherent Christian spiritual meaning of eternal life associated with Christmas wreaths, but other meanings and symbols are found in ancient Rome and Greece.

According to Britannica Encyclopedia, the wreath is an ancient status symbol. Wreaths were made of bay laurel, pine, herbs, and flowers. Each addition to a wreath had a specific meaning as a ritual or cherish symbol.

Each part of the Christmas wreath has a meaning in keeping with the season.

Traditional wreaths are in the form of a circle. This circle has numerous meanings, both to Christians and non-Christians alike:

Materials in the Wreath

The early wreaths were made out of several evergreen materials. The evergreens in general represent continuity and survival through difficult times. Each evergreen used, however, also has a meaning:

The traditional Christmas colors of red and green also have symbolic meaning. Green represents the life and growth. For Christians, it stands for the eternal life of the soul. Red signifies the blood Christ shed on the cross.

This special type of seasonal decoration is full of symbolism. The Advent wreath was adapted from the Germanic custom of the tabletop wreath. It has become a popular custom in several Christian denominations, originating with the Lutheran church and adopted by the Catholic, Episcopal, and Anglican churches.

Many families use an Advent wreath a part of their celebration. Advent wreaths usually consist of an evergreen circle, three purple candles, one rose candle and one white candle (center of wreath). Some people forego the white candle, opting only for four candles. The purple and pink candles represent the four weeks before Christmas, called Advent and the white candle represents the Birth of Christ. A Bible verse is usually read and a short prayer follows. 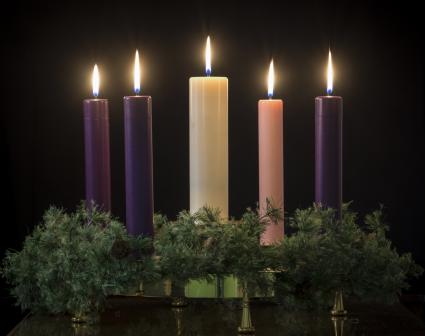 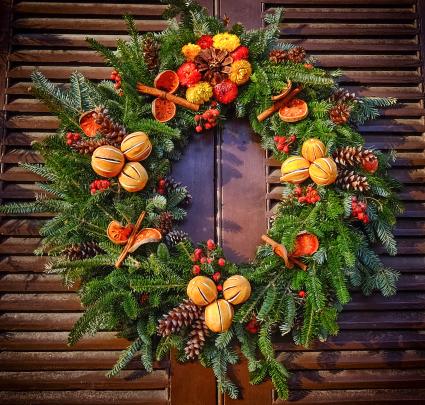 In the tradition of celebrating the fall harvest, many front door evergreen wreaths were decorated with nuts and fruits from the last harvest. The wreaths were hung on front doors to serve as a protection charm. Many homes were adorned year-round, like the practice of Scandinavian farmers in an effort to bring good fortune to each season's crops.

From door wreaths to the religious Advent wreaths, there are many meanings and symbols tied to the use of wreaths. Each one has specific meanings to various cultures. 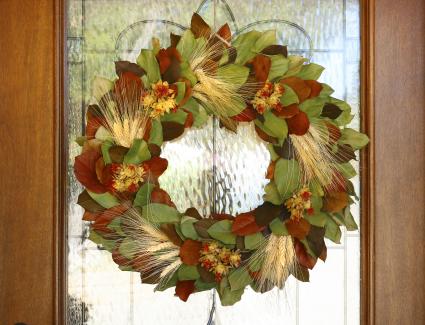 Origins and Meaning of the Christmas Wreath

The Christmas wreath is a beautiful decoration full of religious symbolism from various cultures. It denotes the spiritual belief in life everlasting and the rebirth of the spirit. To Christians, it is a way of professing the miracle birth of the Christ child.