It's been 50 years since Dr. Seuss's marvelous Christmas book, How the Grinch Stole Christmas!, was first published. However, the story has lost none of its charm. It has been adapted for animation and film, and it is now making its debut on the Broadway stage. The story has been so popular that the Grinch's name has become a word in common use, just as Dicken's Scrooge once did.

Dr. Seuss, whose real name was Theodor Seuss Geisel, published How the Grinch Stole Christmas! in 1957 with Random House Publishers. The books is a classic example of Seuss's style--strongly rhythmic, rhymed verse that never falters and ink-drawn illustrations in black and red.

The book is still in print today. Other books have been created to extend our Grinch fun: 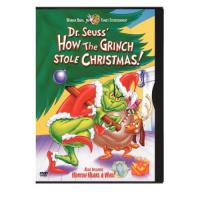 In 1966, How the Grinch Stole Christmas! became an animated television special. On December 18, 38 million people tuned in to watch the first broadcast, and one of the most watched holiday specials in the history of American television was presented to an enthusiastic public. Chuck Jones, the animator behind Wile E Coyote and Bugs Bunny, among others, produced and directed the special. But, Ted Geisel (Dr. Seuss) remained heavily involved in its creation. The two had first collaborated in World War II, when they worked together on animation for military training films made by Warner Brothers for the U.S. Army.

Dr. Seuss added two verse passages to the story and wrote the lyrics to the songs. The music was composed by Albert Hague, and the vocals were sung by Thurl Ravenscroft. Boris Karloff was the voice for both the narrator and the Grinch himself. At the time, Variety magazine said it was the most expensive animation ever made for CBS-TV, but its immediate and continuing success more than justified the cost. The special was aired every holiday season for over 20 years. Today, the cartoon is still on the Internet Movie Database's list of the top 250 films.

The Grinch's appearance changed in the cartoon, where he became green and acquired a longer face. Dr. Seuss said that the cartoon looked more like Chuck Jones than it did like his original Grinch, and in later years Jones agreed. "I'm afraid that it did," he said. "I tend to sneak my face in without knowing it, into things that I draw, because sometimes I'll glance in the mirror to get a certain expression I want."

No matter who the animated Grinch resembles, we love him. The animated version of How the Grinch Stole Christmas! is still watched by thousands of people every year. It is available on DVD for your family to enjoy at home.

In 2000, a live-action feature film adaptation of How the Grinch Stole Christmas! was created. Jim Carrey, wearing a costume made of dyed green yak hairs sewn onto a spandex suit, played the Grinch. The film received mixed reviews but was a huge box-office success. It earned $260 million and was the highest-grossing film released in North America in 2000.

The film is available on DVD and accompanied by an interactive playset.

In fall of 2006, How the Grinch Stole Christmas! opened on Broadway. The musical includes adaptations of You're A Mean One Mr. Grinch and Welcome Christmas, from the animated special and uses Max the Dog as narrator. Matt August is the director. Mel Marvin is the composer and Timothy Mason wrote the lyrics.

Try these free online sources for more Grinch fun with your family!

The Universal Appeal of How the Grinch Stole Christmas!

Why do we love How the Grinch Stole Christmas! so much? It could be the humor; there's no doubt that the Grinch is funny, in his own mean-and-scary way. It could be the energy of Dr. Seuss's lyrics or Chuck Jones's animation. Perhaps we identify with the characters. Chuck Jones said about Max, the dog, "Max represents all of us. He is very honest, very decent, and a very put-upon dog."

We might even identify with the Grinch himself. Most of us, at some level, are overwhelmed by the festivities, and on occasion we too would like to skip the holiday entirely. So perhaps we love this story because it is about redemption. Dr. Seuss once wrote to a fan, "The Grinch in my story is the Hero of Christmas. Sure... he starts out as a villain, but it's not how you start out that counts. It's what you are at the finish."

0
Comments
© 2006-2020 LoveToKnow, Corp., except where otherwise noted. All Rights Reserved.
How the Grinch Stole Christmas