The American Film Institute has called it "one of the best films every made." It ranked #1 on AFI's 100 Years . . . 100 Cheers list of inspirational American-made movies and #11 on their list of greatest American films, 100 Years... 100 Movies. The United States National Film Registry has even included the movie on its list of films selected for preservation.

Director and producer Frank Capra, known for his idealistic approach to serious topics, considered It's a Wonderful Life his favorite film. He said, "In a sense it epitomizes everything I've been trying to do and trying to say with the other films, only it does it very dramatically with a very unique story." 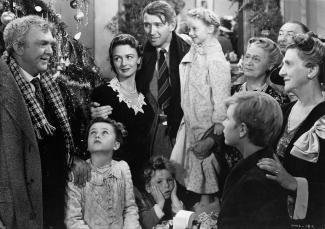 It's a Wonderful Life was the first film that Frank Capra made after returning from service in World War II. However, he never intended it to be pigeonholed as a "Christmas picture". He thought of it as a celebration of the lives of ordinary citizens, people trying their best to do right. This was in the tradition of films he had made in the 1930s that were populist fables celebrating the common man.

Capra found the story in the RKO Pictures archives. Writer Philip Van Doren Stern had written a short story titled "The Greatest Gift" in 1939. In 1943, he made it into a narrative Christmas card. RKO purchased the rights to the story shortly afterward, intending to produce a film starring Cary Grant. That project was shelved. In 1946, Capra's newly-formed production company purchased the rights. Capra added some of his own elements to the story, including the character Mr. Potter.

The Motion Picture Association of America had a strict production code in 1946. It censored words and phrases such as "nuts to you", "dang", "impotent", "jerk", and "lousy" from the script. Another part of the production code stipulated that criminals must be punished for their crime. Capra bypassed that portion of the code, and Mr. Potter never met justice for stealing the $8,000.

Cast of It's a Wonderful Life 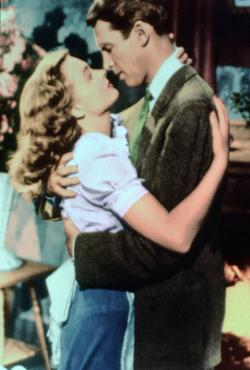 George Bailey was James Stewart's first role after WWII. Like many other successful actors of the 1930s, he found post-war Hollywood different from the industry he remembered. "It wasn't just a case of picking up where you'd left off, because it's not that kind of business," he said later. "It was over four and a half years that I'd been completely away from anything that had to do with the movies. Then one day Frank Capra called me."

The set of It's a Wonderful Life covered four acres at the RKO ranch in Encino, California. It included a main street that stretched 300 yards, three city blocks, and 75 stores. The high school dance contest was shot at the newly-opened Beverly Hills High School, where the gym floor really did split apart to reveal a swimming pool underneath.Filming started on April 15, 1946, and ended on July 27, 1946.

Capra wanted one scene to be filmed with falling snow. At the time, cornflakes painted white were usually used to simulate snow, but the crunching sound would have prevented dialogue from being recorded. Capra covered the set with 3,000 tons of shaved ice, 300 tons of plaster, 300 tons of gypsum, and 6,000 gallons of a fomite-soap-water mixture to get the effect he wanted.

The film premiered in New York on December 20, 1946, at the New Globe Theater on Governors Island. The general release date was January 7, 1947.

It's a Wonderful Life was not an immediate box-office hit. It placed 26th for the year--one place ahead of another Christmas movie, Miracle on 34th Street.

The film had five Academy Awards nominations in 1946.

However, it did not actually receive any of those awards.

In 1947, a memo sent to the Director of the FBI indicated that "some sources" viewed the film as subversive and pro-Communist. The film's negative portrayal of the capitalist banker Potter and its glowing portrait of the common man Bailey were the basis for those allegations.

In the early 1970s, many PBS stations began to broadcast It's a Wonderful Life during the holiday season. The audience for the film grew rapidly, and for several years the movie was rebroadcast multiple times during the season on many television stations. Since the film was often aired several times a day, viewers could jump in and out of the movie at will.

Two colorized versions have been produced. They are generally considered to be inferior to the black-and-white original. Jimmy Stewart told Congress, "I tried to look at the colorized version, but I had to switch it off -- it made me feel sick."

The 60th Anniversary Edition will be released on October 31, 2006. This colorized version available on DVD. The black-and-white theatrical release is available on DVD and VHS.

Liberty Films, owners of the rights to It's a Wonderful Life, was purchased by Paramount Pictures and remained a subsidiary of Paramount until 1951. In 1955, Paramount sold a few of their features as well as many of their cartoons and shorts to television distributor U.M.&M. T.V. Corp. The sale included the original television syndication rights, the original nitrate film elements, and the music score to It's a Wonderful Life, as well as the story on which the film was based.

Soon afterward, National Telefilm Associates took over the rights to the U.M.&M. The copyright to the film was due for renewal in 1974, but a clerical error at NTA prevented the it from being renewed properly. The film was still formally protected under copyright law, because it was a derivative work of all the other copyrighted material used in production -- such as the script and music -- whose copyrights were renewed.

For a number of years, television stations assumed the film was in the public domain and aired it freely. In 1993, Republic Pictures (the successor to NTA) enforced its claim of copyright, relying on the 1990 U.S. Supreme Court that involved a similar situation with the movie Rear Window. As a result, the film is seldom shown on television today. NBC is currently licensed to broadcast the film. The colorized versions have been withdrawn.

Artisan Entertainment took over home video rights to It's a Wonderful Life in the mid-1990s. In late 2005 these rights reverted to Paramount, whose parent company is Viacom.

0
Comments
© 2006-2020 LoveToKnow, Corp., except where otherwise noted. All Rights Reserved.
It's A Wonderful Life