Tim Burton's The Nightmare Before Christmas is undeniably the most unconventional Christmas movie ever made. After all, its main character, Jack Skellington, is the "Pumpkin King of Halloween Town"! Yet, it is through the wonder that Jack sees in Christmas that viewers can experience the holiday in a new way. 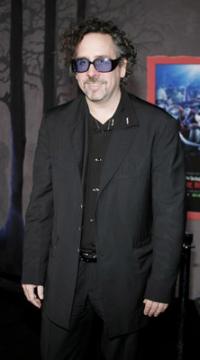 Tim Burton at the 3D Nightmare Before Christmas premiere

Burton, once an animator with Disney, supposedly drew inspiration for The Nightmare Before Christmas from the Seuss classic How the Grinch Stole Christmas, as well as the retail collision of the Halloween and Christmas holidays. No sooner are goblins and jack o' lantern decorations taken down than snowmen, Santa, and reindeer are put up.He sketched out some basic drawings and wrote a poem of more than 30 verses, describing Jack the Pumpkin King as listless and bored with the same old scary and dark life he's always known. Jack wants to liven things up in Halloween Town. So begins Burton's tale of Jack's pursuit of this mystical event known as Christmas.

Here's one verse from the poem:

I'm sick of the scaring, the terror, the fright.
I'm tired of being something that goes bump in the night.
I'm bored with leering my horrible glances,
And my feet hurt from dancing those skeleton dances.
I don't like graveyards, and I need something new.

Jack is excited to bring all the glitter and sparkle of Christmas to Halloween Town, but unfortunately, things just don't go as planned. In stop-motion animation, the story unfolds to show how the best intentions can sometimes go awry.

While Burton was still at Disney, he pitched the idea for an animated feature to them, but the company thought it a bit too dark and different than their usual fare. Burton held on to the idea until the time was right. The Disney animation division didn't produce the film, but the parent company is in charge of distribution and memorabilia.

Unlike many of his other projects, Burton did not direct this film. Burton worked with longtime collaborators Caroline Thompson and Michael McDowell, both of whom adapted Burton's drawings, poem, and general story for the screenplay. Henry Selick directed the animation team, and he and Burton worked closely together on the design of the sets and puppets for the film. Development took nearly three years.

Not a big hit when initially released on Oct. 29, 1993, it has become a cult favorite because of its masterful animation, music, and touching if somewhat macabre story. It was also nominated for a number of industry awards. Another holiday film, It's a Wonderful Life, has enjoyed that same trajectory. Totally disregarded when it first hit the big screen, few can imagine a holiday season now without George Bailey.

The Cast of Voices in The Nightmare Before Christmas

Award-winning composer Danny Elfman not only wrote all the songs for the movie; he also performed many of them. He is also the singing voice for Jack and plays a couple of auxiliary characters.

Other well-known voices include:

Even though the film is animated, it has a quite a ghoulish quality to it and may not be suitable for children under 12, so preview it first to determine if your child would understand it. However, it is usually a favorite with teens.

Burton creates films that make the unusual seem normal, the out-of-place part of the in-crowd. Once a lead animator for Disney's cartoon The Fox and the Hound, Burton realized that his vision did not exactly fall into the typical Disney aesthetic, and set out to tell stories his own way.

As a writer and director, he has a long line of successful films, including two in the Batman franchise, Pee Wee's Big Adventure, the ghostly romp Beetlejuice, Edward Scissorhands, Planet of the Apes, the tender yet still uncompromising Big Fish, a remake of Charlie and the Chocolate Factory and the animated Corpse Bride. The animation style of The Nightmare Before Christmas is also used in Corpse Bride, featuring the lead voices of Johnny Depp, a frequent star in many of Burton's films, and Helena Bonham Carter, Burton's wife.

Burton followers will recognize many references to his other films in The Nightmare Before Christmas, including theme music and cars from Batman, the cat from his first film Vincent and even a Mickey Mouse head forming out of a train's smokestack.

Holiday buffs who love this movie and all its idiosyncratic views on Christmas and Halloween events might be interested in the following:

Comments
© 2006-2021 LoveToKnow, Corp., except where otherwise noted. All Rights Reserved.
The Nightmare Before Christmas: A Closer Look