Rudolph the Red-Nosed Reindeer is one of the familiar images that springs to mind when we think of Santa's reindeer. The shiny red nose that guides Santa Claus's sleigh is legendary. We hear his story in song, about the misunderstood reindeer who was ridiculed because of his different appearance. But where did the story come from? Read on and find out.

The Origin of Rudolph

So how did this legendary reindeer become so popular? Rudolph is actually a recent addition to the Christmas holiday characters. The original story about Rudolph was created in 1939 by Robert L. May, a copywriter for the Montgomery Ward department store. Since coloring books were given away as a promotional item for the store during the Christmas season, management thought it would be a great idea to create their own booklet to save money. Little did they know that the story Robert came up with would become such a big hit! Over 2 million copies of the book were distributed that year. However, since Robert worked for Montgomery Ward, the rights belonged to the company. Fortunately for him, in 1947 he was given full copyright ownership of the story.

Rudolph's place in Christmas history became more secure when Robert May's story was published commercially. A cute nine-minute cartoon followed in 1948. Then the red-nosed reindeer made it to the big time when the story was made into song. Written by Johnny Marks, the son-in-law of Robert May, it became an instant classic. Gene Autry sang it originally, and the recording sold over 2 million copies. Next to " White Christmas", it was the second best selling song of its time.

Where did Robert May get his inspiration about Rudolph? It started as a combination of the story of the "Ugly Duckling", and the fact that Robert himself was mistreated as a young man because he was shy and small. The original Rudolph did not live in the North Pole with Santa. Instead he was a reindeer who lived an unassuming life with his parents. Rudolph was teased about his nose by fellow reindeer, but never by his family. Santa discovered Rudolph one foggy Christmas as he was delivering gifts to his home. He saw Rudolph's bright red nose through the window, and decided to ask for his help. The rest is history. 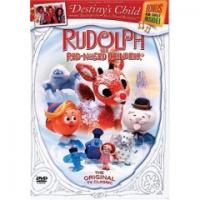 Get the original Rudolph the Red Nosed Reindeer on DVD

In 1964, the most endearing children's stop-motion animated puppet classic, "Rudolph the Red Nosed Reindeer" was aired on NBC. This timeless classic filled with cute characters -- including elves, snowmen, and a snow-monster -- has captured the hearts of people worldwide and is still aired every year after Thanksgiving. It was produced by Rankin/Bass, a company who is involved with many Christmas related projects. A sequel with computer animation called "Rudolph the Red Nosed Reindeer and the Island of Misfit Toys" was eventually produced in 2001. Determined to keep the look from the original film, it was produced to look like the animated puppets in the 60's release. A Rudolph movie was also produced in 1998, but flopped in the theaters and went straight to video.Today, you can purchase the original Rudolph movie on DVD.

You can also find Rudolph in many children's books. Click here to see a selection.

0
Comments
© 2006-2021 LoveToKnow, Corp., except where otherwise noted. All Rights Reserved.
Resources, Advice & Tips for Covid-19
Read More
Rudolph the Red-Nosed Reindeer: The Origin of His Story