One of the most unusual facts about Scottish Christmas traditions is they haven't been around very long. For nearly 400 years, the celebration of Christmas as we know it was banned in Scotland. It's no wonder that the Scottish New Year's festival, Hogmanay, is a days' long party.

The Banning of "Christ's Mass"

The people of the United Kingdom were oppressed by Oliver Cromwell in the mid-1600s. During a period known as the Reformation, Parliament issued the ban in 1647, and upheld it for nearly 15 years.

When Cromwell fell from grace, the ban was lifted in the most of the U.K., but not in Scotland. The Scottish Presbyterian Church continued to discourage Christmas holiday festivities, including formal Mass, and people suffered penalties if caught celebrating. This ban lasted for nearly 400 years.

The acknowledgment of Christmas was a quiet, reverent affair bookmarked by church services and hard work. Well into the 20th century, Scots worked on Christmas day. Few adults exchanged presents, although children received small treats and tokens. There would be a light Christmas dinner. Some families had small evergreens in the home, or decorated doorways with boughs of holly.

Finally, in the late 1950s, Christmas and the U.K. tradition of Boxing Day became recognized holidays for the Scottish people.

Scottish Christmas Traditions Past and Present

One of the Scottish Christmas traditions that was banned for so many years included the baking of Yule bread. During the ban, bakers were required to give the authorities the name of anyone requesting this holiday staple. A loaf of unleavened bread is baked for each individual in the family, and the person who finds a trinket in his or her loaf will have good luck all year.

Divination was once a popular custom. On Christmas Eve, a single person cracked an egg into a cup. The shape of the egg white determined the profession of the possible mate. The egg was mixed into a cake, and if the cake cracked during baking, the person would have bad luck in the next year. Sweeping fireplace ashes and reading them as a fortune teller would read tea leaves was also common.

Many Scots still burn a twig of the rowen tree at Christmas as a way to clear away bad feelings of jealousy or mistrust between family members, friends, or neighbors.

The first visitor to a home on Christmas Day was called the First Footer. The person must bear gifts of peat, money, and bread to symbolize warmth, wealth, and lack of want. This later became a New Year's Day tradition, however. Placing candles in the window to welcome a stranger is a long-upheld Scottish Christmas tradition. By honoring the visit of a stranger in the night, you honor the Holy Family, who searched for shelter the night of Christ's birth.

Once the ban on Christmas was lifted, the Scottish adapted many of the Christmas traditions used in England and the U.S. Today, the Scots celebrate with festive Christmas trees and presents for all. The traditional meal usually begins with cock-a-leekie soup. Roasted turkey has become the traditional main course, but glazed ham and leg of lamb, among others, are also common. Side dishes may include black pudding, Yule bread, and soda bread. Christmas pudding and shortbread are often served for dessert. 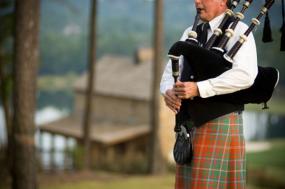 "Auld Lang Syne" is the most famous Scottish holiday music.

The ban may have halted the advancement of Scottish Christmas traditions, but Scottish New Year's celebrations always brighten the cold and dark winter. For nearly a week, revelers celebrate the dawn of the new year with street festivals, concerts, parties, and large bonfires. Some customs include: