"'Twas the night before Christmas, and all through the house . . . " That famous line is the beginning of one of the most beloved Christmas stories of all time. For nearly 200 years, children have gone to bed often too excited to sleep in their anticipation of Santa Claus arriving on Christmas Eve to leave them presents under the Christmas tree.

History Behind the Poem

In 1823, the poem, A Visit From Saint Nicholas was published anonymously and the real author has been a controversy ever since. Fourteen years after the poem was first published, Clement C. Moore (1779-1863) admitted he'd penned the popular Christmas poem. One story claims Moore's housekeeper sent the poem to be published since Moore was rather embarrassed by the poem when compared to his more serious works. He later included it in one of his books of poems.

However, the real author of the poem, according to his children, was Major Henry Livingston, Jr. (1748-1828), one of Dr. Moore's friends. The children claimed Livingston had first recited his poem to them in 1807 and the many years afterwards. Livingston was known for publishing his poems anonymously or under the lone letter "R".

According to the Poetry Foundation, Livingston was declared the true author, by Don Froster of Vassar College in his 2000 book, Author Unknown: On the Trail of Anonymous. Years later, Moore is still credited as the original author inspired to pen the poem while on a winter sleigh ride to go shopping.

Which Poet Penned the Famous Poem?

Depending on who is asked, the chances of Moore being the author vs Livingston is typically split evenly between the two. Each side claims forensic evaluations prove in favor of their poet. However, Moore has been credited for the poem since the mid-1800s and his name is the one associated with the poem in society's mind.

Free Printable of 'Twas the Night Before Christmas

If you're looking for a copy of the poem, you can download this free printable one. Just click on the image below and save the pdf file to your computer. If you run into any any problems, you can use a detailed guide to Adobe printables. 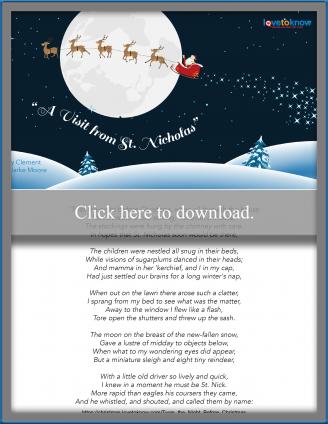 The catchy wording, vivid imagery, and memorable lines of 'Twas the Night Before Christmas gave rise to contemporary symbolism influencing society's perceptions of St. Nicholas, more commonly known as Santa Claus. Many details included in the poem were not part of mainstream America's Christmas celebration, having instead a strong religious form of celebration.

Santa and his flying reindeer weren't known at the time the poem was written. When the poem became more and more widely distributed, the poem's symbolism became ingrained in the American Christmas celebration.

Santa Claus visiting homes on Christmas Eve became an accepted tradition. According to Theodore Roosevelt Center at Dickinson University, Moore diplomatically side-stepped a common controversy during the time the poem was first published. The actual day of Christmas was in dispute between the Protestants (December 25) and the Catholics (December 6). Moore avoided the controversy by simply referring to the timeframe as Christmas Eve without a date.

Moore's poem solidified the tradition of hanging stockings at Christmas. According to the Smithsonian, there are numerous stories for explaining the origin of hanging stockings by the fireside to be filled by Santa Claus. The most popular one tells of a destitute widowed father worried about his three daughters' prospects of marriage since he had no dowry for them. 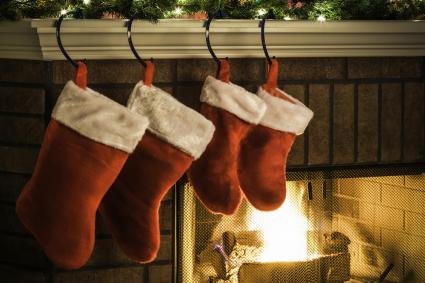 St. Nicholas to the Rescue

Overhearing the town gossip about the girls' predicament, St. Nicholas knew the proud father wouldn't accept charity. He decided to crawl down the family's chimney. Once in the home, he found the girls' stockings hanging by the fireplace to dry. He deposited a few gold coins in the stockings and slipped back up the chimney undetected. The next morning, the girls awoke to a future with many marital possibilities.

Another iconic imagery Moore created in his poem is Santa's eight flying reindeer. Not only did Moore introduce the fantastical flying reindeer, he gave each of them a name, much the same way a family names a pet. This made the poem more personal and beloved.

Along with the controversy of who penned the poem are many versions of what inspired Moore to write the famous poem. It's reported that Moore based the overall story on St. Nicholas found in Dutch legends as a gift-giving saint. One story claims Moore decided a local Dutch handyman in town was the ideal iconic Saint Nicholas. He set out to fashion an adorable and loveable persona that combined the two.

Since its first appearance in 1823, the famous poem has been reprinted in newspapers and books around the world. There is no accurate measure of how many times it has been printed or into how many languages it has been translated, but the 431 words divided into a mere 56 lines is arguably one of the most widely distributed holiday tale in existence.

Every bookstore offers a wide range of interpretations, from cartoon illustrations to intricately and lovingly crafted illustrated masterpieces. While some versions have slightly modernized Moore's now outdated language, very few changes have been made. Books have been created by illustration artists such as Jan Brett, Christian Birmingham, and Mary Engelbreit, each one giving new meaning to the classic words.

Twas the Night Before Christmas is so outrageously popular that it spawned innumerable parodies adapted for every lifestyle imaginable. Politically correct, college final exam, Star Trek, dieting, teaching, alternative holidays, regional dialects, and even adult content versions have adapted the poem. While these may not contribute as much to the wholesome holiday spirit as the original work, their very existence demonstrates the overwhelming popularity of the poem.

Various movies have been produced based on 'Twas the Night Before Christmas poem. From the era of black and white to modern CGI, Santa Claus movies are popular holiday treats. 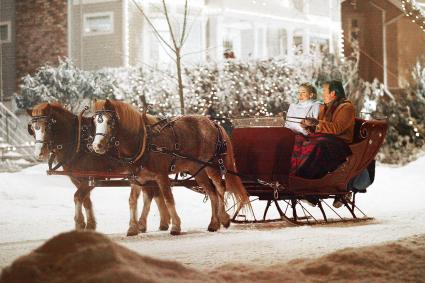 One of the most memorable is the The Santa Clause trilogy starring Tim Allen (Scott Calvin character) in the lead role of Santa Claus. In the saga, Allen is an unwilling replacement for Santa who falls to his death when he slips off the roof of Scott Calvin's home.

Netflix's The Christmas Chronicles, starring Kurt Russel, tells the story of siblings attempting to catch Santa on video and everything that goes wrong. Comedic movies such as these and others reinforce the jolly good-hearted persona portrayed in Moore's poem.

An entire market sprung up around Moore's poem and burgeoned the fantasy character deeper into mainstream American culture. Coca-Cola was the first to iconicize Santa Claus as described in Moore's poem. From garments, jewelry. home decor, figurines, toys and all types of Christmas china, tableware and glassware, Moore's St Nick and his reindeer are portrayed.

Twas the Night Before Christmas Traditions

The poem, 'Twas the Night Before Christmas is read during the Christmas season by millions of Americans. It has become the embodiment of the non-religious side of the holiday and spawned an entire industry. Whether your family curls up by the fireside with a treasured copy of the poem turned into a book or movie, the legacy of this one poem lives on from one generation to the next as families celebrate Christmas.