They may not be traditional holiday carols, but the Twisted Christmas songs by Bob Rivers are fun renditions of the craziness of the holiday season that many people can relate to. Before you set up a Christmas party playlist, however, you should be familiar with each song's lyrics and understand that they are not always appropriate.

Bob Rivers is a popular radio personality and parody songwriter in Seattle, Washington. He began his radio career in Connecticut and has also been on the air in Massachusetts, Rhode Island, and New Hampshire as part of a career that spans more than 20 years. Along with his opinionated radio shows, he is also well known for crafting song parodies, most especially of Christmas carols. His Twisted Christmas songs are frequently played on radio stations across the country during the holiday season, and he has released several albums of crazy Christmas songs.

While Bob Rivers has released more than two dozen Christmas humor parody songs since the late 1980s, his most popular songs are requested year after year and have become just as familiar as any traditional tune.

In addition to these popular favorites, Bob Rivers' Twisted Christmas parodies include such outrageous titles as: 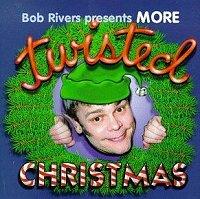 Where to Buy the Songs

Bob Rivers' Twisted Christmas carols can be found in a number of CD and cassette compilations, including

These albums can be found in the holiday or comedy sections of most major music stores during the holiday season. Individual funny Christmas songs and full albums are also available for mp3 downloads from different online music retailers, including iTunes and Napster.

The Twisted Christmas albums may be hilarious to one person, but they can easily be offensive to another. Before sharing the songs or adding them to a holiday party playlist, be sure to carefully preview all the lyrics for profanity, racial and ethnic slurs, and other offensive language.

Despite the popularity of these songs, they are not considered appropriate for more conservative events, such as a school classroom holiday party, a religious service, or a formal Christmas party. Instead, reserve them for lighthearted holiday moments or anytime during the holiday season when you need a cheery laugh.

From casual parodies to more questionable songs, the Twisted Christmas songs can be fun alternatives to traditional carols if they are played at appropriate times an before an appropriate audience. Whether you just need a laugh or you want to poke fun at the whole institution of Christmas, Bob Rivers can help!