In China, Christmas has not always been a publicly celebrated religious holiday. However, as China becomes more global, it has started to welcome a commercialized version of Christmas, known as "Sheng Dan Jieh" or the "Holy Birth Festival," with both religious and secular Chinese Christmas traditions. Overall, the general public tends to treat Christmas as a secular or romantic holiday with large gatherings and parties like those that Americans enjoy on New Year's Eve.

When Is Chinese Christmas?

Christmas is celebrated in China on December 25th each year. However, unlike America, it is typically a non-religious holiday. With only about 5% of the population Christian, according to the Pew Research Center, and the government cracking down on Christian religion and traditions, religious celebrations of the holiday are minimal. While there might be underground church services on Christmas eve and family gatherings on Christmas day, Christmas is a commercialized, non-national holiday by most. Rural and smaller villages might not even celebrate the holiday at all. Usually Chinese New Year, or the Spring Festival, is the star of Chinese holidays.

Because only a small percentage of China's population is Christian, Chinese society has been slow to adopt Christmas. However, Christmas decorations in stores and on streets are becoming a common site. Explore China's take on this fun, joyous holiday through looking at a few of its unique traditions.

While most American's celebrate family, Chinese young people celebrate with friends or their significant others. They might choose to go out to a movie, karaoke or go shopping. Young couples make it a day for dating and celebrate by exchanging small gifts. 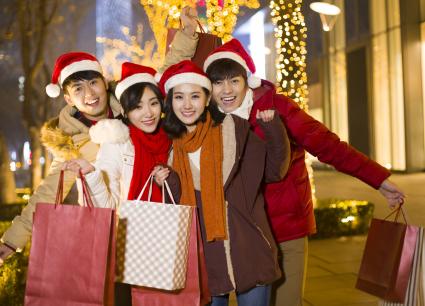 Large cities like Beijing, Shanghai and Hong Kong that take part in the Christmas festivities center the celebration around children. Children in China eagerly hang muslin stockings for Santa Claus (who they call "Dun Che Lao Ren" which means "Christmas Old Man"), to fill them at Christmas. Gift baskets filled with food and other items are always a welcome host or hostess treat when visiting during the holidays. Rather than gifts some might also give a hongbao (red envelope) with lucky money, much like at the Spring Festival. 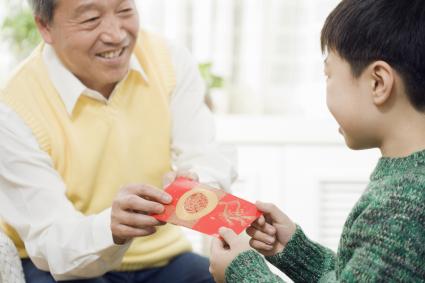 While some families don't celebrate Christmas per se, they do use it as a way to prepare for the Spring Festival. They might pay respects to their ancestors by putting up portraits. They might also put out fruits that symbolize peace and wealth like apples and oranges.

Decking the halls is distinctively different in Chinese culture. Immerse yourself into Chinese decorating style.

Paper Ornaments and Tree of Lights

One of the most popular Chinese Christmas traditions is to hang beautiful paper lanterns indoors, outdoors, and strung around the plastic Christmas tree, which is called "Tree of Light". Families add paper chains and flowers in bright, festive colors to the Christmas tree. Malls and shopping centers make it a big affair with lights, decorations and Santa. 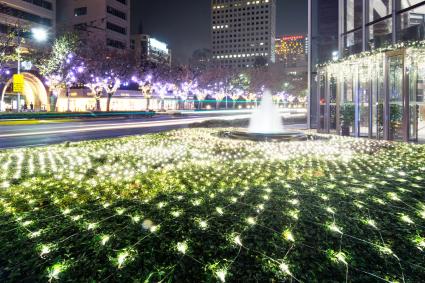 Saxophone Santa and His Sisters

Santa and music tend to go hand-in-hand. From the bells in America to the sax in China, Kris Kringle loves his music. While the origins are unknown and highly theorized, a common Christmas scene in China is saxophone Santa. That saxy Santa also forgoes the elves and is followed around by his sisters. Santa's sisters are typically women dressed in red and white that follow him around in shopping malls or on the street. 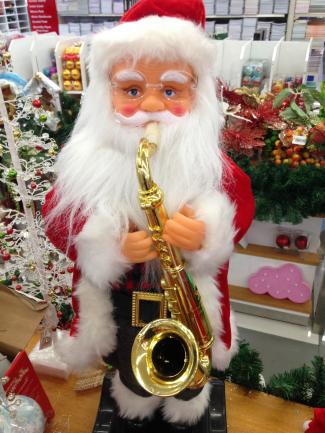 Like American traditions, those that celebrate Christmas in China have a feast. Rather than turkey and stuffing, the menu would look similar to a Spring Festival fair with roast pork, jiaozi (Chinese dumplings), spring rolls, huoshao (baked roll with or without stuffing), and rice. However, Christmas time does offer one unique food tradition for the Chinese. 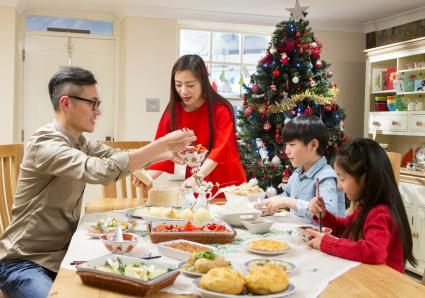 A fun and unique tradition in China is the giving of apples on Christmas. Much like Valentine's hearts, these apples are beautifully boxed and typically contain unique and fun sayings. Since the word for apple, pingguo, and Christmas Eve, ping'anye, sound similar in Mandarin, individuals might give an apple to their loved ones as a sign of Christmas and peace. They are also known as peace apples. 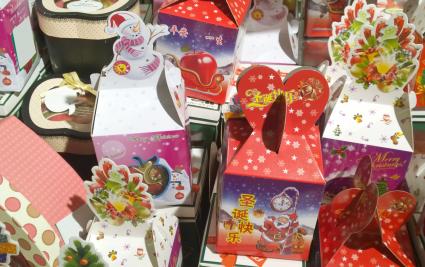 The Melding of Traditions