US Native Americans celebrate Christmas with a combination of their cultural customs imbued with other cultural practices. Many of these include European customs with a strong emphasis on Native American traditions.

For many Native Americans, maintaining cultural and historical integrity is of utmost importance for a Christmas celebration. This focus helps to preserve the "old ways" as part of tribal tradition. This is why many tribal members choose to mix European Christmas traditions, such as the decorated Christmas tree and a manger scene with native customs, such as dances honoring Indian heritage and beliefs.

Since there are more than 300 federally recognized Indian tribal entities in the US, holiday celebrations vary considerably from one tribe to the next. The following list is just a small sampling of Native American Christmas traditions observed by various tribes.

A number of different cultures have a friendly figure who treats children to candy and gifts during Christmas. For many Native Americans, this gentleman is known as The Handsome Fellow. Legend refers to a Creek leader named Chief Hobbythacco, which translates in English as "handsome fellow". According to tradition, chiefs were given gifts throughout the year, especially during summer months, and the chiefs would then share their bounty with tribal members. Some Native Americans encourage children to believe The Handsome Fellow is responsible for leaving presents on Christmas Day while others believe Santa comes to visit.

The Winter Solstice has been a reverent period since ancient eras. For indigenous peoples all over the world, it's a time to offer gratitude, honor family and ancestors, and follow a ritual observance of beliefs. The fact that theological historians also place significance on this same time period makes the Winter Solstice a vital component to holiday celebrations. A few days before the Solstice, members of some tribes make prayer sticks in honor of an ancestor or native deity. They plant the sticks during a ceremony on the Solstice.

In the United States, Winter Solstice festivities occur on December 21 or 22, depending on the year. Tribes may host dances, bonfires at sunset, festivals, and educational programs. If you'd like to see a Native American Solstice observance, consider the following:

Numerous Native American tribes host dances on Christmas Eve or Christmas Day. In many circumstances, the celebrations include a manger scene and a recreation of the three Wise Men offering gifts to the Christ child. Some Indians observe a similarity between the Chiefs of the Great Nations and the Wise Men, as well as the act of bestowing newborn babe with gifts to that of the Great Thunderbird telling the braves in fields about the birth.

The holidays are always a time of gratitude, and Native Americans have a variety of delicious dishes that are worth a try. Food.com has a nice selection of traditional Native American recipes.

You can find specific Native American adaptations of Christmas such as the Christmas Carol. The Huron people have an original Christmas carol that tells the story of Christ in the manger.

The story is told in native Huron language:

The carol was first translated to French, then English:

"Within a lodge of broken bark
The tender Babe was found,
A ragged robe of rabbit skin
Wrapped His beauty 'round;
But as the hunter braves drew nigh,
The angel song rang loud and high:
Jesus, your King is born,
Jesus is born,
In excelsis gloria."

Huron legend says the ancient people built a nativity of fir trees, featuring Joseph, Mary, and baby Jesus as Indians, the Wise Men as chiefs, and animals such as a bear, a fox, and a buffalo in attendance.

You can use Native American symbols and ornaments to decorate a Christmas tree as a way to honor and continue tribal traditions. There are many authentic representations of cherished heritage symbols used in creating Native American holiday ornaments. 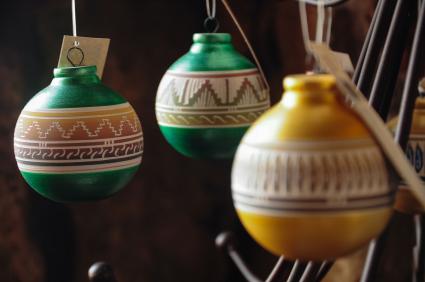 There are many wonderful books that celebrate a Native American Christmas. Use these in your classroom or at home during your festivities.