Christmas in Venezuela is a cultural and religious celebration. Venezuelans honor similar traditional customs as other parts of the world, but also add traditions steeped in heritage.

According to World Holiday Traditions, many Venezuelans practice Catholicism. As a result, their Christmas celebrations center on the birth of Christ.

From December 16th through December 23rd, Venezuelan Christians go to morning mass. Hispanic Culture Online states that during this time, children go to sleep earlier than usual each night to be rested for morning mass. Venezuelans light firecrackers and ring bells each morning to awaken worshippers. It's not unusual for streets to be filled with worshippers on roller skates making their way to mass.

On December 24th, a special midnight mass, known as Miso de Gallo ("rooster's mass" in Spanish), is observed. Folklore states that the mass got its eclectic name because the rooster was the first creature to call worshippers to honor the newborn Christ child on Christmas Eve. 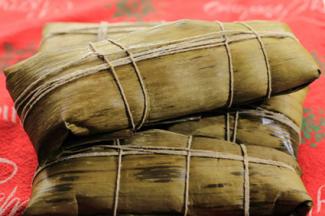 Venezuelans observe several traditions to prepare for midnight mass on Christmas Eve, known as Nochebuena or Noche Buena. The entire family attends midnight mass and returns home to enjoy a meal to celebrate Christ's birth. The meal includes traditional Venezuelan foods such as:

The Christmas Eve table may also include more modern dishes such as turkey, cold vegetable salad, and chicken with fruit. 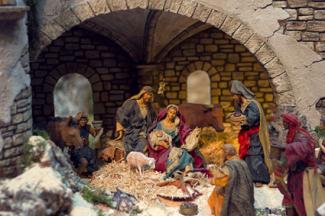 Nativity scenes trump Christmas trees in Venezuela although some families put trees up. The scenes, known as nacimientos, are often elaborate and may include not only the Holy Family and manger but the entire landscape of Bethlehem. The more elaborate scenes are known as pesebres. Though the scenes go up well before Christmas, The Holiday Spot states that Baby Jesus is not placed in the pesebre until midnight Christmas Eve.

According to the book Culture and Customs of Venezuela written by Mark Dinneen, visitors often leave money on the nativities to be used to purchase additional figures and decorations. Some towns have competitions on who has the best nativity scene.

Some Venezuelans also decorate the inside and outside of their homes with light strings.

According to Explore Margarita, the Gaita is Venezuela's traditional Christmas music. Rhyming vocals accompanied by four-string guitars and maracas make up this music style. Not all Venezuelan Christmas music is religious, indicates Carnaval.com. Revelers sing Christmas carols, known as aguinaldos, door-to-door parranda style and are rewarded with food and drinks.

USA Today reports that numerous Venezuelan celebrations often include cultural dances including the salsa, merengue, and Venezuela's native dance--the Joropo, a couples dance. Therefore, you may find people dancing them at Christmas celebrations, too. 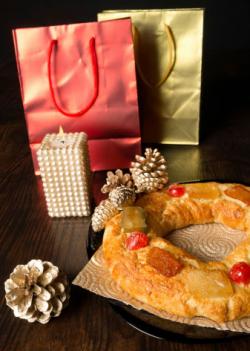 Baby Jesus plays the role of Santa Claus in Venezuela, bringing gifts for children on Christmas Eve. On January 6, some Venezuelans celebrate Three Kings Day (Epiphany), known as El Dia de Los Tres Reyes Magos. According to Dinneen's book, the celebration of Three King's Day in Venezuela has died out, although some people still observe the tradition.

Another Three Kings Day tradition is the Rosca de Reyes. This is a sweet bread shaped like a wreath with a small Baby Jesus figure baked inside. The person who finds the figure inside their serving of bread must host the traditional Candlemas celebration in February.

In the Andean region of Venezuela, people pay homage to the Christ child, known as paradura del nino, by singing to him in front of the nativity. The Baby Jesus is taken from the manger and kissed by each participant before being returned in an upright position.

Some Venezuelans celebrate the Day of the Innocents on December 28 to mark the slaughter of male babies by Kind Herod after Christ's birth. Town festivals are held with music and dancing, and children dress up in costumes and play practical jokes.

Venezuelans embrace a full range of Christmas customs from mass and decorations to food, music, and gift giving. Christmas is an important Venezuelan holiday, and you don't have to be of Venezuelan heritage to incorporate some of their traditions into your Christmas celebrations.